I can’t wait for Disney World to reopen. Once it does, it will feel as some normalcy will have returned to our nation, not ignoring what has gone on these past 3 months or even the past several weeks. I know that there are angry people everywhere, some rightfully so. Even when visiting the happiest place on earth people get cranky, but it does seem that we all get along or try to get along when visiting Disney World. I am so excited, that I have created a countdown clock below for when the parks reopen. Enjoy!

I am a baby boomer. I grew up with Walt Disney coming into our homes weekly. I remember Walt promoting Epcot, the Experimental Prototype Community of Tomorrow. Walt was at the point in his life where he had acquired success in the movie industry and Disneyland.  He was ready to apply these successes to a much bigger project. He was a dreamer and was interested in new technology, just as he had learned to blend this new technology into his movies. Disneyland had many innovations; the monorail, the WED people mover and all of the automation required to keep the parks going. Walt was now ready to try his hand at finding like-minded people in all types of vocations. He wanted to find dreamers who would push the envelope to find new ways of doing things.

2. Epcot was a promise of a greater future

As Walt was getting older, thinking of the cities his grandchildren would grow up in, He saw what was happening to many of our large cities, between the crime, pollution and poorly designed communities. Walt wanted Epcot to be his attempt at developing the city of the future, different than what many American cities were becoming. 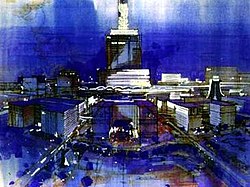 Above is an early artist rendering of what Epcot would look like.
Its purpose was to be a “real city that would ‘never cease to be a blueprint of the future,” designed to stimulate American ideas for urban living.

3. The success of Disneyland gave birth to many ideas in Epcot

Realizing that he and his Imagineers had learned a good number of things in the development of Disneyland, they could be put to use in planning communities, and perhaps even cities.  Walt began to immerse himself in books about city planning, such as Ebenezer Howard‘s Garden Cities of To-morrow.

This had a significant influence on Walt’s design for the Epcot he had dreamed about.

A recording on October 27, 1966, less than two months before Disney’s death, was a 25-minute film about his plans for the Florida Project, then dubbed “Disney World.”  Epcot was supposed to be the central attraction. Walt showed the radial design of the city using his long pointing stick to describe this new Florida Project.

As you can see at the top of the picture is Epcot. Before the public was made aware of Epcot, it was called Project X  by Disney’s team.

Many of us remember seeing rocket launches during school, especially the momentous ones, like the first Mercury, Gemini, and Apollo missions. If you were alive during Apollo 11, you know where you were when  Neil Armstrong placed his foot on the lunar surface. All of the technology that went into the space race was set before our eyes. Walt’s company had even been contracted to produce animated films about space travel and what the future might look like for humans. Tomorrowland in Epcot was an extension of what the world was experiencing, in a theme park venue.  Going to Tomorrowland in Epcot didn’t feel that foreign to most of us, because we had been a part of this technology revolution if only observers.

I don’t know about you, but the dreams that Walt had were shared with us before Walt Disney’s Wonderful World of Color each Sunday evening had been planted like a seed within me. There wasn’t anything that I couldn’t do. If man could go to the moon and Walt was going to build a city of the future, then why would I limit myself for my future? Some people might say that I am ignoring all of the problems that we are facing in the world today. But, I simply choose to focus on the future with the hope that I can be a part of making it better than it is now, that my excitement that I share isn’t too far off from what Walt must have felt. Here’s to you Walt, let’s get this thing built!

Stories, adventures and a wild ride